Today sees the retirement of toolmaker Joe Kijanski from Martin’s Rubber Co Ltd in Southampton, England, after 64 years of service. To mark this outstanding achievement, and reflect on the career that Joe has had with the company and his colourful contribution to life at Martin’s over the years, it is fitting that we share some of Joe’s story. 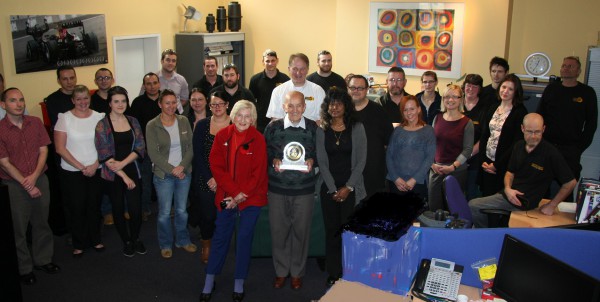 The turmoil in Europe during the years of the Second World War affected millions of people’s lives across the continent, and Josef Kijanski, a young Polish engineering student living in Lodz, was no exception. At the outbreak of war and the conquest of Poland by the Nazis, his skills were identified as beneficial to the German war effort, and he was sent as forced labour to work in an aircraft factory near Bremerhaven, building Stuka dive bombers. Conditions were extremely difficult, with materials and food in short supply, and workers housed in temporary camps under guard. Penalties for not working correctly were very severe, in an attempt to deliver more equipment to the front line, control scarce materials and prevent sabotage. Having been falsely blamed for a manufacturing error on the part of a German Production Supervisor, Joe was sent to a concentration camp run by the Gestapo, during which time he resolved that he would  find a way out of Germany. Once back in the aircraft factory after 12 months in the concentration camp, plans were made for Joe and a colleague to cut through the wire surrounding the factory camp and escape by train to Austria where conditions were better, a very risky journey which required a lot of luck and courage to boot…. Fortunately for the escapees, once at the train station, they managed to persuade a German to buy tickets on their behalf following a few drinks and some cash changing hands. After a number of close shaves, Joe and his comrade made it to Vienna and found work, however the advance of Russian forces once again put them at risk, and they asked guides to escort them over the mountain passes into Italy where they eventually joined up with Free Polish forces for the duration. At the end of the war, Joe’s unit was taken to England where they ended up in a repatriation camp at Hiltingbury, Chandlers Ford, just outside Southampton, and Joe, reunited with wife Barbara and son Richard, wondered what to do next. 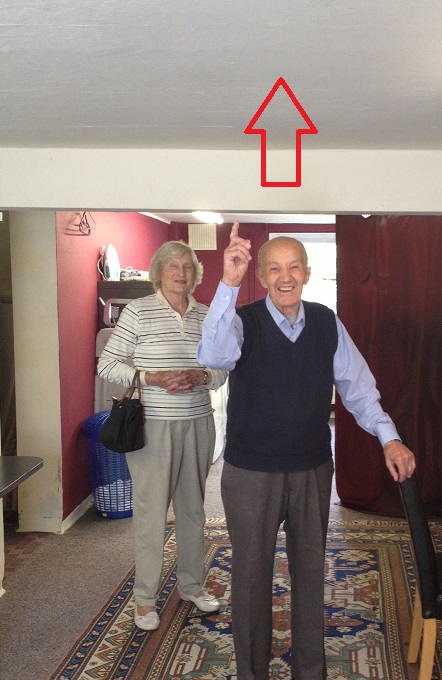 On a recent visit to the old Oxford Street building, Joe points to the basement ceiling that he used to push up when bracing large moulds in presses

Following the end of the war and the annexation of Poland by Russia, Joe & Barbara set about finding work in England, and Joe soon took a job working as a dental technician for a practice in Oxford Street, Southampton, just next door to Martin’s Rubber, and got to know Bert Campbell, the owner of Martin’s. Bert and his family also lived in Chandlers Ford, and Joe recalls Bert offering him a wheelbarrow load of apples from his trees to take back to camp for people to eat. Bert soon found out about Joe’s engineering skills, when he offered to fix Bert’s broken golf trolley. Impressed  by the repair work, Bert decided that he could use a chap with these kind of skills, and so Joe began work at Martin’s in March 1950. Joe became a trusted part of the family business very quickly, and Bert’s daughter Pauline still recalls her father getting Joe to give her a lift to school in the small company van. On the occasions that she was late, Bert would shout at Joe telling him leave her and carry on and get to work, but Joe would wait just round the corner and pick her up out of sight of Bert, for which our Chairman, Pauline, is still grateful! In the mid 1950’s Bert built a new factory for Martin’s in nearby Orchard Place and the new toolroom was a huge step forward. On Brian Hooper joining the company with his marine engineering skills in 1956, a large centre lathe, horizontal milling machine , new small lathe and a shaper were installed; the shaper was typical of Martin’s innovative approach, having a Model T Ford gearbox and clutch fitted to it in order to harness the drive required; quite a sight if 4th gear was selected by accident instead of 1st. A very large reciprocating hacksaw produced tooling blanks from aerospace alloy billets, which Joe and Bert would then turn into a wide variety of moulds, all sketched out in red pencil in the Mould Book for future reference. We estimate that Joe manufactured around 4000 moulds between 1950 and his move to part time work when he semi-retired aged 65, some of which are still used today by our long standing customers. 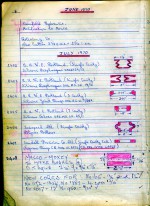 The original toolroom in the Orchard Place factory of Martins Rubber

Joe was also responsible for maintaining all the factory equipment, from changing the contactor fingers on the large two roll rubber mixing mill, through to hydraulic press seal changes, overhauling hydraulic motors, making rule forme cutters, work benches and special jigs & fixtures. He also found time to trouble shoot jobs, train colleagues and apprentices including Bert’s grandsons Adam & Paul Hooper, and could sharpen scissors like nobody else. The toolroom was always immaculately tidy, with everything in its place and spotlessly clean, a trait he retains to this day. When he passed 65 and formal retirement age, Joe decided that he would rather continue working part time rather than stay at home all day. Shaun Gunn, our Tooling Manager, had joined the company in 1990, and we always said that it would be up to Joe to decide when he finally wanted to retire, but it was a bit of a surprise that Joe then took another part time job with a local engineering company, and trained up on a CNC metal turning lathe to keep himself busy! In recent years Joe has been coming in one day a week to carry on maintenance duties for Martins, and has continued to take a keen interest in the ever progressing technology that we have introduced into our toolroom, whether Solidworks modelling software, Hypermill machining software, our DMU 5 axis machining facilities, and of course our CNC plastics machining capabilities. However following his 90th birthday celebrations he  has finally decided that it may be time to slow down a bit, and spend some more time with his wife – so this year he finally decided it was perhaps time to fully retire. It has been inspirational to see how Joe has constantly sought to adapt and progress throughout his working and personal life, and has maintained a keen interest in all things. His influence on Martin’s has been significant over the years, and in conjunction with Brian Hooper,  built the foundations of a progressive manufacturing organisation launching us into our 150th year (2015) with a heritage from which our current generations can take both pride and inspiration. Having known Joe all my life, spending school holidays watching him work, and then learning traditional skills from him during my early working years, he was both a mentor and motivator. I am incredibly grateful, both for the actual work he has done for the company, and also for his influence on my career. Seeing Joe still sprightly and engaged with life at the age of 92 is an inspiration, and I shall miss his weekly visits here at the factory. 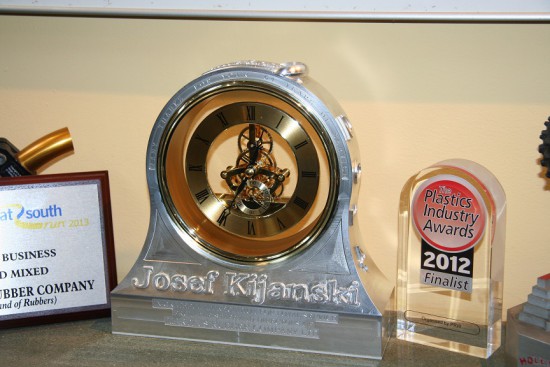 As a mark of our respect and affection, the toolroom staff lead by Shaun Gunn designed and manufactured a magnificent mantelpiece clock for Joe, with the case fully machined from the aircraft alloy that has been such a part of his working life. He was very touched to be presented with it today, and spoke with great feeling about the people and times he has had here at Martin’s, and promised that he will still be popping in to keep an eye on us. On behalf of all the staff and directors of Martin’s Rubber since 1950, thank you Joe. Adam Hooper 30th October 2014

Home-grown experts are a hit