News & blog / Technical Features / Rubber Shrinkage – what is it and why?

Rubber Shrinkage – what is it and why?

Rubber Shrinkage and what to compensate for.

One of the problems we face when manufacturing rubber products is “rubber shrinkage” – the fact that rubber parts always come out of the mould that manufactured them smaller than the cavity that produced the part; they have “shrunk”. This phenomenon is generally known as “shrinkage” and to achieve the desired size of the finished part, it is necessary to increase the size of the mould cavity by some degree, allowing for a number of factors that create rubber shrinkage and affect the outcome, sometimes in unexpected ways. For example, different polymer types have their own general rubber shrinkage characteristics, with some types shrinking much more than others for reasons we discus below, and therefore the same mould may not produce the same size of part if the polymer type is changed. There are a number of reasons for rubber shrinkage, some of which can be influenced, others which cannot, and the factors affecting rubber shrinkage are generally  as follows.

One major problem is that there will always be some degree of expansion of the rubber compound during the heating and pressure phases of the process that is necessary to transform the uncured material into its finished, vulcanised state. The problem is that the dies or moulds necessary to withstand the temperatures and pressures of the process are typically made of aluminium or steel, and both or these metals have a significantly lower rate of linear expansivity than the rubber contained within the mould. While this difference in linear expansivity helps provide extra in-mould pressure (although that can lead to “backrinding” in some cases) and thus improved cure conditions, it can also fracture weak moulds. It also means that having been constrained by the mould during curing at a size smaller than the rubber would have attained if heated in a relaxed state, when the part is “demoulded”,  the cooling of the part from this constrained size means that the higher degree of linear expansivity of rubber compared to steel or aluminium results in the part retracting or “shrinking” proportionately more than the tool that made it, finishing up substantially smaller than the corresponding mould cavity.

The proportion of fillers within a rubber compound also have a significant effect, principally because their coefficient of linear expansivity is closer to steel than that of rubber. Fillers are used to increase the hardness of rubber polymers, so the more heavily filled a polymer is in order to increase its hardness, the less it will shrink. This is an issue where customers request that a series of different hardness parts are made from the same mould in order to assess relative performance where FEA may be unable to reliably predict the desired results. If such a part has tight tolerances, depending on size and shape of the part, very real differences in size may be observed following full cooling of the various parts, and, in extreme cases, this may require individual moulds with different rubber shrinkage factors to be manufactured in order to provide parts of the same size but different hardness. 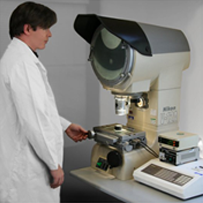 The curing process is necessary to build the molecular crosslinks  that give rubber its “memory”, and the way in which these crosslinks form for any given polymer can also affect the finished results, and this is another factor that can influence the final size of any given part. Mainly driven by the cure system, cure contraction of peroxide based systems may typically be 0.8-1.0% whereas sulphur cure systems may typically be 0.1-0.3%, but it is still the case that particular mixes and particular polymers will vary outside these guidelines. However, on fine tolerance parts, even something as apparently minor as changing the cure system can be seen to influence the final size of the part.

Volatile loss is another aspect of the cure (and post-cure) process where polymers have plasticisers or curative that evolve out of the material during the curing process and once driven off to the final cured state, result in a lower volume of material and therefore a part that has “shrunk”. The amount by which the part shrinks due to this effect can to a degree be engineered, as some plasticisers are more volatile by volume than others, and as such it may be possible to devise a change in the final sizes of a part without actually changing the mould cavity that produces it, simply by modifying the formulation of the rubber compound.

When chopped fibre or woven fabric is introduced to a rubber compound to reinforce it, there will be lower shrinkage evident along the orientation of the the fibre and polymer chains where they are aligned, and higher shrinkage evident across the alignment, where shrinkage in the polymer pulls any parallel fibres closer together. This can be a difficult effect to predict and control, as the combinations of polymer and fibre type, and the weft / weave of any fabric construction all have a significant influence on the outcome, and baseline trials are often the only way to predict specific performance. This effect is also an issue when solid inserts are bonded into a rubber component; the strength of the bond will locally restrain the rubber adjacent to the substrate it is bonded to, but again the higher level of coefficient of linear expansivity of rubber compared to the substrate will result in shrinkage of areas of rubber unrestrained by a substrate, and compensating proportionately for this effect can be quite difficult.

The shape of a part can influence the degree of rubber shrinkage seen; long thin parts will tend to exhibit much higher levels of shrinkage than would be anticipated from more solid shapes, and as such specific baseline trials may be necessary to establish the particular characterisation of the specific polymer and product combination. Once this is done, mould designs can be executed with confidence, for parts of similar polymer and dimensional requirements.

The method of manufacture of moulded parts can also be an issue, on Compression moulded parts this can be down to the “grain” within the blanks of material which is generated as part of the milling and sheeting off of the uncured compound, where the observed shrinkage can be different across the length and width of the milled sheet material. This effect can be mitigated by using Transfer and Injection moulding if necessary, but for some large or long components, traditional Compression moulding is still the most appropriate way of manufacturing moulded parts.

As can be seen, there are many factors at play that influence the final rubber shrinkage outcomes of the processes that manufacture rubber parts; even with years of experience and technical backup, it can be difficult to anticipate the results that will be obtained from any particular new tool and material  combination.  There are formulas and general guidance from various research projects carried out over the years, but it remains a grey area, and the best way of getting consistently reliable parts is to baseline the particular materials and process conditions for the application, and design tooling from there. At Martin’s Rubber our experience allows us to get most parts right first time, and our in-house tooling department constantly test and update their records with checks on new materials as they come into use, adding to our depth of expertise and knowledge.

The post Rubber Shrinkage – what is it and why? appeared first on Martin’s Rubber Company.