The latest purchasing managers index (PMI) on manufacturing has shown further growth, rising to 52.5 in June, reports bbc.co.uk. This is the fastest growth since May 2011, with May’s figure also being revised up from 51.3 to 51.5. As any number above 50 is evidence of growth, companies in the manufacturing sector can have increasing confidence of an economic recovery. Rob Dobson, a senior economist at Markit, which compiles the index alongside the Chartered Institute of Purchasing and Supply, says the sector has made “positive strides” with the help of encouraging demand both at home and abroad. He said: “The near-term outlook for output also remains on the upside as above-trend sales growth depleted inventories that manufacturers will need to rebuild later in the year. Job creation is still weaker than hoped for, but this should improve if solid demand growth is sustained and eats into spare capacity.” 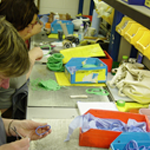 It is thought that manufacturing output rose by around 0.5 per cent in the second quarter of the year. This is the latest relatively positive economic report to be released in recent weeks. Telegraph.co.uk notes that the new governor of the Bank of England, Mark Carney, is chairing his first Monetary Policy Committee meeting this week. The body decides each month whether alter interest rates or quantitative easing measures among other fiscal decisions. Author: Paul Smithson Date: 03 July 2013

The importance of back-up rings