News & blog / Latest News / Did you set out to do your job when you were nine?

Did you set out to do your job when you were nine?

The answer for most of us is probably ‘no’. However, we were undoubtedly influenced in our choices and interests from a far younger age – and there is nothing stopping us now from trying to ensure that those influences on our future generations are varied, informative and positive.

Why would any child want to do your job when they grow up?

If your answer to that is they wouldn’t, then you’re probably not reading the right article. However, if you love your job – or even if you think your job is ok and you’re happy that it pays the bills – then think about whether a nine-year-old might consider aspiring to do your work. Does a nine-year-old even know your job exists?

Why should a nine-year-old know your job exists?

Because if there’s even a slim chance that the job you’re doing might be ‘the one’ for them, they need to understand how to get there – and how their lessons relate to what you do every day. They need to know that there’s a better reason for learning long division, how to use a protractor or how osmosis works, than just getting some answers right in an end-of-term exam.

How can you show a nine-year-old what you do every day?

It’s not easy – and depending on what you do it can be daunting to try to communicate just what it is about your job that’s so interesting, however much you love it! But it is not impossible – and they really want to understand. 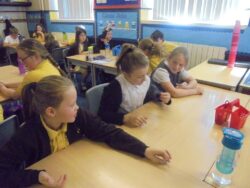 Last week I went to St. Michael’s Primary School in Dumfries to talk about my job and the work that Martin’s Rubber does. In all, I spoke with close to 100 pupils across three different classes and age groups.

How did I make it interesting? I took along some raw material for them to touch. I took examples of parts that we’ve made. I showed them photos of the trees that rubber comes from and the vehicles on which our parts are used. I showed them a video of a Formula One pit stop. Twice (it’s only eight seconds long!).

Sample products included a prop shaft seal from a Spitfire (a bonded part that they immediately tried to pull apart). An oxygen mask for a Chinook that they could put over their faces to understand the benefits of rubber as a malleable material. Particularly popular was the non-return valve for a ship’s toilet (they were convinced I’d brought in a used one!).

How many people does it take to win a formula one race?

This was a question I put to them. Guesses ranged from somewhere between 30 and 400. We worked through the logic; the driver, the people in the pit stop bay from the video clip, the designers, the factory workers. All the people who work for all the companies who supply parts and services to the team and the engine manufacturers. I estimated somewhere around 200,000 people.  The thing I wanted to drive home as much as anything else, is that every single person in that chain matters, both as individuals and as a team. If our cleaner doesn’t do a good job, and a piece of swarf from our tool room ends up in that jack wheel tyre, the jack fails on pit stop. Game over. Everybody matters.

Kids need someone to ask those questions of, to talk to them about what it’s like to do your job. They also want to understand how to make decisions about how they will spend the majority of their waking hours as an adult. They need reassurance that it’s ok if they don’t know what they want to do when they grow up – but that the sooner they can start to think about the choices they have and some of the factors they have to balance up, the better.

How can you help?

I work remotely and live in Scotland where schools run an initiative called World of Work week; I was one of many volunteers who went in to speak to these pupils about 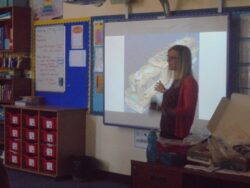 my job – there was also a computer engineer, a nurse, a bus driver, a caterer and a hotel worker, and those were just the ones I heard about. I’m pretty sure that your local primary school would happily engage you to go and speak to the kids about what you do – and if that’s not structured enough for you, try inspiring them by volunteering via https://www.stem.org.uk – it’s not a massive commitment; you only have to take part in one session a year to be retained as a volunteer.

I don’t want to coerce children into STEM careers if that’s not really what they want to do, but there is such a vast choice of career within our companies even outside of a direct STEM-based position that they do need to understand what they would be missing out on – and you can help to influence and inform that decision.

Is there really a STEM skills gap?

It may sound sensationalist to say that Britain is headed toward a skills crisis, but have a chat with anyone who works in the world of engineering and you’ll find that it’s actually pretty accurate. We (UK manufacturers and engineers) are investing huge amounts of money into the core elements of Industry 4.0 to improve productivity and remain competitive in a global market – we have data coming out of our ears and need people with computing, analytical and stats skills to help us implement and use the software, and to interpret the information.

Added to that the fact that innovation is the key to growth and prosperity in a world where we struggle to compete on price due to our labour costs, and we have an immediate need for scientists and engineers; not just to fill seats, but we need to attract the best of them. And then keep them.

And the businesses that we run aren’t full of engineers from top to bottom; we need great marketers, the best salespeople, tenacious purchasers, planners with an eye for detail, great accountants, brilliant leaders. We need people to understand that manufacturing and engineering is an exciting place to be, that it is a world where doing a job well can mean a medical development that saves a life, environmental technologies for a greener planet, a win for an F1 team or a new technology that helps a farmer to prevent loss of livestock. A world where every single person in that company makes a difference.

Will a nine-year-old really want to hear what you have to say?

Some of the brilliant questions I was asked during that visit are listed below, and provide an insight into some of the concepts that are unfamiliar and daunting to a child who has only ever known the education system. They were a tough audience, but in the best possible way – so huge thanks to our workforce of tomorrow for taking the time to listen to me.

Questions from the floor: