Recent research into applications for wonder material graphene by a team of scientists from Trinity College Dublin and Surrey University has revealed a low cost method of making strain sensors by modifying the electrical conductivity properties of various rubber types. Following a period of research lead by Prof. Jonathan Coleman at Trinity, the team developed a method whereby toluene is used to swell commercially purchased natural rubber bands, creating pores between its polymer chains. Then a second solvent made from water and N-methyl-pyrrolidone was used to disperse graphene into the pores, thus avoiding any of the common vulcanising processes used to distribute carbon into the polymer lattices of rubber. 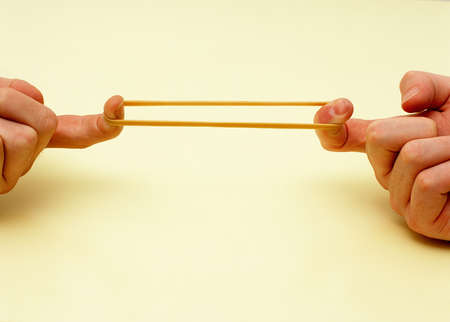 The interesting and potentially very useful outcome of this process is not only that the previously good insulation properties of natural rubber are cancelled out by this surface infusion of graphene, but that the level of conductivity achieved varies predictably with the amount of stretch applied to the rubber. Therefore it is possible to envisage that flexible conductors may be made that are very robust due to the inherent properties of the rubber itself, and by calibrating the changing levels of conductivity versus stretch, low cost flexible sensors could be manufactured. These may have many novel applications in wearable products, architectural or aerospace solutions, and indeed, marine and energy infrastructure. The speed of hysteresis response of a natural rubber makes it ideal for observing rapid motions, and Dr Alan Dalton commented that ’We can stretch the rubber to 800 per cent of its original length and still see measurable and quantifiable changes in conductivity. Because the response is so good we can do it very quickly, we can see how fast we’re straining it, so for applications such as measuring pulse or breathing it can give you a very accurate measurement.’ He also went on to say that ‘We’re using shop-bought rubber bands and such a small amount of graphene that the cost is in pennies, but it performs as well as any commercial sensor.’ The process appears to be very viable, and the research team is now working on ways to scale up the process, and seek opportunities to exploit the exciting properties of this discovery. Author: Adam Hooper Date: 16th October 2014

How hard is Rubber? Your guide to Rubber Hardness