It has become a bit of a tradition since Martin’s sponsored the very successful MR Thumpercross 4stroke motocross series between 1997 and 2005 to create Trophies that competitors really appreciate. Our ongoing connections with offroad motorsport lead us to create winners trophies for the first “Vintage Motocross des Nations” held at the historic Farleigh Castle circuit near Bath in September 2009. This meeting has become established as second only to the British Motocross GP, and the 2012 edition was no exception, so 12 more of these cherished awards were specially manufactured, this year using our new Hypermill software and DMU50 5 axis machining centre. The results were superb, attracting a lot of comment and appreciation over the weekend, and after two days of racing the Belgian Team won both the Twinshock and Evo categories, receiving their prizes with great satisfaction. The commentators, amongst them our very own Paul Hardy, awarded the “Man of the Meeting” trophy to USA rider Ryan Hughes, who won all his races and spent a lot of time chatting to fans; a thoroughly well deserved award. 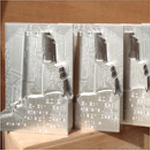 It was a great weekend all round, and even more so when our toolroom staff confirmed that the new software and machine had produced these superior results in a quarter of the time that our previous resources could acheive. Author: Adam Hooper Date: 17th September 2012

What are the different types of rubber moulding?