When considering Finite Element Analysis of rubber, it is vital to understand that rubber is a unique material in that during moulding it behaves like a highly viscous fluid; think of that well-known brand of sauce that’s been in the fridge for a few days. Initially it is hard to get moving, but with the correct application of force and temperature, it begins to flow more freely. After its polymer chains have been vulcanised (or “cooked” if we continue the culinary theme) on a macroscopic scale, rubber can perhaps best be visualised as a plate of spaghetti and meat balls with the spaghetti as the polymer chains and the meat balls as the points of vulcanisation, or, crosslinking. 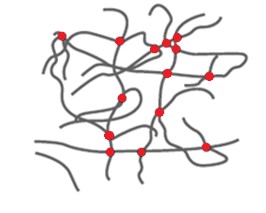 Crosslinks on Polymer chains in a rubber compound, or, spaghetti with meatballs…..

The elasticity of any rubber compound is directly proportional to its crosslink density. Once cured, rubber can undergo large, reversible, elastic deformations, returning to its original shape after removal of the load – unless damage has occurred by overloading it. As you can imagine, simulating the behaviour of this unique material structure is unlike standard linear analysis such as is used on metals like steel, which have well defined perfectly linear responses to strain. Since our Spaghetti and Meat balls composition of elastomers makes their behaviour more difficult to model as they are inherently nonlinear in their response to strain, simulations with rubbers require nonlinear analysis methodologies to be employed. Accordingly, highly specialised material models are needed which allow for a nonlinear stress-strain relationship and temperature dependent material properties, with customised material testing required to feed the analysis models. Using material data from online sources is ill advised as it’s typically a best case rather than a true representation of the actual material response to stress-strain. This is particularly true when temperature is applied; after all, no one likes cold Spaghetti as the texture (elasticity) of the meal is markedly different when cold, from when it is hot. 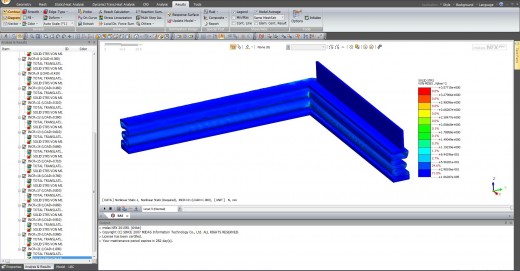 Martin’s Rubber have recently invested in Nonlinear analysis software allow us to simulate the behaviour of your rubber components under the physical conditions in which they operate. The finite element model is then analysed by a finite element analysis solver, which calculates data reflecting the design behaviour to the applied boundary conditions, and can help to identify weaknesses or potential failures in the design. Nonlinear responses could be caused by any of several characteristics of a system, like large deformations and strains, related material behaviour such as stress relaxation (Compression Set) or due to the effect of contact conditions, vibration and temperature etc. Failure to account for these boundary conditions can result in issues in maintaining effective sealing or early product failure due to unforeseen stress/deformation conditions, so it is essential to identify and allow for all the physical parameters affecting any given application, by specific testing of the materials under consideration, prior to finalising designs and undertaking prototyping. You can see an animation of a typical rubber bellow on our Youtube site, which demonstrates how stresses change within the rubber as distortions are applied, and helps highlight potential design issues. If you have a new design to verify, or an existing application with a problem, contact our Technical team to see what we can do for you, although in giving advice, Spaghetti and Meat balls are not included. Author: Richard Kennison Date: September 2015

The pros and cons of EPDM sheeting